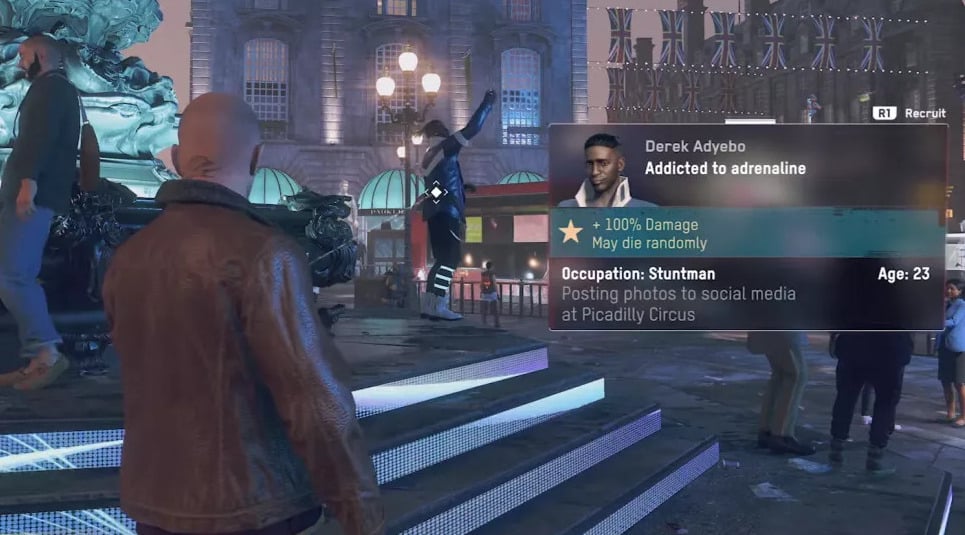 That’s a big claim, but Watch Dogs Legion is an ambitious game. There is no one protagonist in Legion. Cutscenes, story beats, and dialogue will all change depending on the DedSec member you’re currently playing as. Each character has a host of different attributes that affect their playstyle. Scanning a random citizen might reveal that their background makes them better at non-lethal takedowns or hacking drones. But you can’t just hit a button and recruit them right away—you have to sway them to your side, convince them DedSec is worth risking their life for.

Samuel went hands-on with Watch Dogs Legion and came away impressed with how deep the recruitment system goes. “I recruited a person, watched her liberate Camden Market from goons (and put Abe Welch in the hospital), then saw her get double crossed and shot dead in front of a massive security force. I was a little bit attached. The game’s big idea is working.”

NPCs aren’t only a set of stats, though. For instance, killing a man on the street will cause his family to resent DedSec, which affects your chances of recruiting them. In Samuel’s hands-on, he accidentally put a man in the hospital, hacked the hospital to pay for his treatment, and then ingratiated them to DedSec’s cause.
Advertisement

A person’s stats are influenced by their backstory. For instance, someone who has been injured by Albion soldiers in the past might have a damage buff against them. Someone who creates 3D printed art forgeries gets a discount when using the in-game 3D printer to make new weapons. Some are more a little wackier, like the Derek Adyebo NPC seen in the demo, who is “addicted to adrenaline.” He deals 100 percent extra damage, but “may die randomly.” Jeez.

The trailer above from Gamescom 2019 goes over some of these same points, including another character that might die randomly. Here’s hoping fewer Londoners bearing that special perk show up in the game than in Legion’s marketing.